ITV shut down rumours of a fight between Sherif and Anton

It was announced yesterday that Sherif Lanre had been removed from the Love Island villa for 'breaking the rules.'

Screengrabs of a message from the islander reveal he had a fight with Anton in the villa.

However, ITV claim these messages, 'did not come from Sherif.'

Love Island Update: After breaking the villa rules, Sherif had conversations with the producers and it was mutually agreed that he would leave the Love Island villa. #LoveIsland

The text reads, 'Anton happened. Purposely moving to Anna while I'm right next to him trying to touch her leg.'

'Asked him for a chat in private because I wanted to confront him and it got heated and security had to split us up, heartbroken but s**t happens man.' 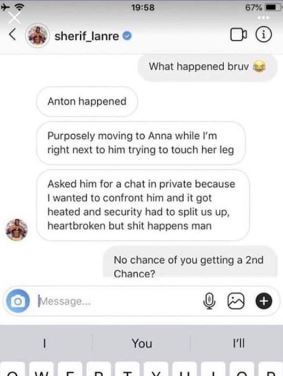 ITV however, have shut down claims of a fight between the islanders.

A spokesperson for the channel told Heart, 'We have checked and these messages did not come from Sherif.'

It was announced yesterday that Sherif had left the Love Island villa.

A spokesperson the for show said, "After breaking the villa rules Sherif had conversations with the producers and it was mutually agreed that he would leave the Love Island villa."

Sherif made a short statement.

He said: “In a case of poor judgement, I broke the villa rules and as a result agreed with the producers that it was best for me to leave the villa.

"I regret that I didn’t conduct myself in the right way and, as a 20 year old guy, it’s something I know I will take on board and learn from."

He continued, "I really enjoyed my time in the villa and look forward to catching up with everyone on the outside.”

Sherif was one of the 12 original islanders and before leaving the show was coupled with Anna.

It is unsure what this means for her situation or the next recoupling.