Hozier Adds Extra Date At The 3Arena Due To Popular Demand

Irish artist Hozier has added an extra date at the 3Arena this Christmas due to popular demand.

The singer will take his Wasteland Baby! World Tour to the venue on both the 10th and 11th of December. 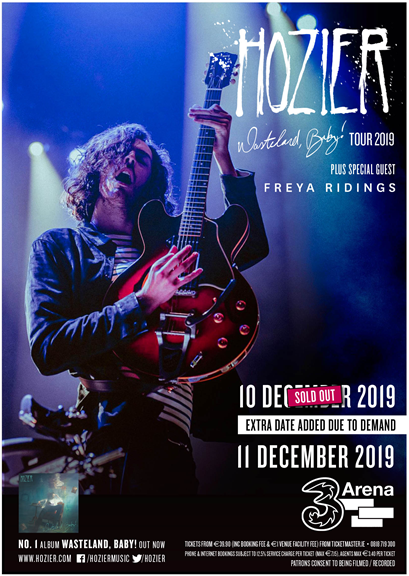 Hozier's been doing Ireland proud as he brings his sold out tour across Europe, the USA and Canada.

That also includes five sold out shows at London Palladium this October.

Loved coming back to play Große Freiheit 36. Thank you for bringing so much energy! See you again Hamburg 🖤 📸 @ruthlessimagery

He came to prominence with the release of his multi-platinum, Grammy-nominated anthem Take Me To Church in 2014.

The track also went on to win 'Best Song' at the 2015 Ivor Novello Awards and has had over one billion streams to date.

He'll be joined on stage by special guest Freya Ridings.

She just released her brand new debut album and is renowned for her hit Lost Without You.

The track shot through the charts after its appearance on last year's series of Love Island.

Tickets from €39.90 including booking fee are available now at Ticketmaster.

The Search Is On For The 2020 International Rose Of Tralee