Molly-Mae Hague has responded after Jake Paul shared a screenshot of an alleged message he received from her on Instagram.

Molly-Mae's boxer boyfriend Tommy Fury has been challenging Jake to a fight for a while now.

Last month, Jake agreed to fight him on one condition; his brother Tyson Fury will have to fight Michael Hunter on the same night.

The YouTuber told ES News, as quoted by MailOnline, "Tommy is weak."

He took it one step further by claiming, "Tommy’s girlfriend DMd me before they went on that reality show."

Just this week, Tyson got involved, and shared a video calling out Jake and backing his brother Tommy.

In response, Jake took to Instagram Stories to say, "The desperation is seeping through the pores of the Fury family."

"It's quite embarrassing. The heavyweight champion of the world is on Instagram talking about Jake Paul."

"Begging me to fight his brother," he added.

Jake continued, "Listen Tommy, focus on your fight that’s in a couple of weeks that nobody even knows about by the way, this clip will be the biggest promotion for your entire f**king fight."

"Find an opponent. You’re literally picking someone to fight you in three weeks who hasn't even been training."

"Fight someone real, do a real PPV, then maybe we can chat."

"The last guy you fought was 0-9. The people you fought in total have a combined record of 15 wins and 250 losses."

"You come looking for me in Miami to try and find me in a gym, you known damn well I’m not in Miami, I'm in Puerto Rico."

He taunted, "If you wanna pull up here I’ll gladly beat the f**k out of you."

"Tommy, you fight for $100,000. You have some ladders to climb to get onto my level unfortunately my friend."

Jake concluded, "I’m not talking about this anymore, peace out, f**k you guys.”

In his next Instagram Stories video, he added, "And one last thing Tommy..."

"You should be more worried about your girl sliding into a bunch of dude’s DMs than you should be about fighting me."

He then shared a screenshot of a message he allegedly received from Molly-Mae. 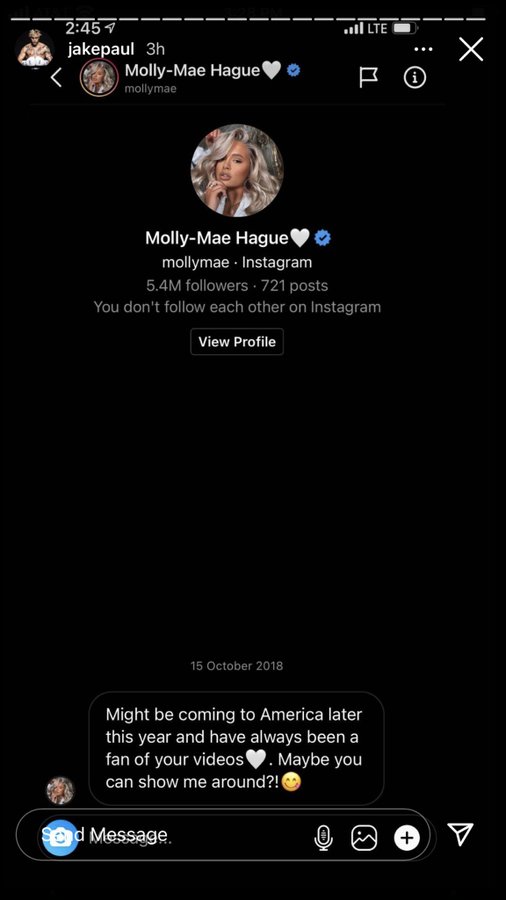 It wasn't long after this that Molly-Mae took to Twitter to set the record straight.

She tweeted, 'Times must be hard when you’re having to fake a DM.... photoshop is scary.'

Times must be hard when you’re having to fake a DM....🥴🥴 photoshop is scary.