Jack And Dani Are Back Together

On again off again

Love Island's 2018 winners are back as Dani Dyer has confirmed the pair are together again after sharing a pic of them together on Instagram.

Danny Dyer, Dani's father, said that he wanted to "put something to bed", and confirmed that the two hadn't split up, but had just had an argument.

He went on to speak to Jonathan Ross, saying

Jack & I have sadly decided to part ways. It's been an incredible 6 months, and we will always have a place in our hearts for each other, but sadly we've come to the realisation that it's not meant to be long term. We both plan to stay friends. I hope you'll all understand. Love Dani. 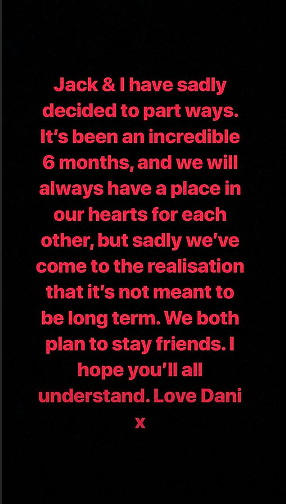 The special is set to air on ITV 2 on Monday 17th December.

According to reports, we can expect lots of drama from the special. Sam Bird and Georgia Steel are set to reunite on set for the first time since Sam claimed Georgia cheated during their relationship.

Georgia sticks with her story and continues to deny the rumours. She then goes on to say she was miserable during her time with Sam. We all know she's LOYAL!

This Is What Love Islanders Will Be Paid For TV Special

Charlie Puth Chats To SPIN About His Love For TikTok, New Music & More