And one of his guests is former flame Kendall Jenner so you can imagine it gets pretty funny.

The pair play Spill Your Guts and one question asked is, "Which songs on your last album are about me?"

The pair must take turns asking each other questions.

If one of the players refuses to answer, they must eat an item on the table chosen by the other player.

Some of the food items include bug trifle, thousand year old eggnog and cod sperm.

Harry asks the first question, "You are one of the few members of the Kardashian/ Jenner clan that does not have children."

If Kendall refuses to answer she must eat the thousand year old eggnog.

The reality star reluctantly answers, "Rob is number one and then it would be like Khloé Kim, Kylie, Kourtney..."

She defends her answer, "They're all amazing!"

Kendall asks the next question, "I'm dying to know this - which songs on your last album were about me?"

The first person to eat

Harry reacts to Kendall's question by putting his hands over his face and muttering, "Oh, God."

He prepares the cod sperm she has chosen for him to eat and lays a napkin on his lap.

The singer ends up chewing down on the food item as Kendall looks on in disgust.

Harry asks the next question, "You're the highest paid supermodel in the world. Who's the most unlikable supermodel?"

He tells her she has to drink the salmon smoothie if she refuses to answer.

She admits, "I have the answer, I can't say it though," before she drinks the smoothie.

Kendall asks, "Have you ever watched an episode of Keeping Up with the Kardashians."

He admits, "Yeah, it was the one where you were all eating salads in the kitchen..."

"And then you all were shouting at each other." 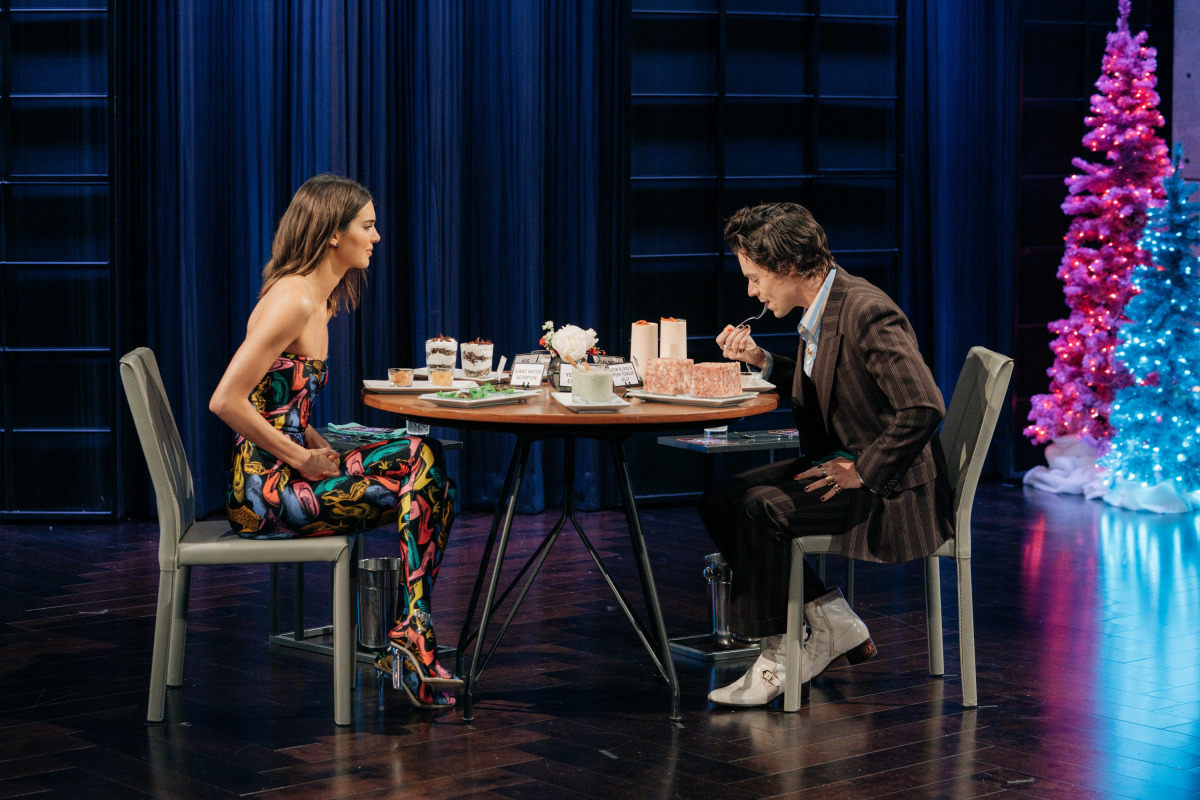 Harry asks the next question, "Who is the most surprising celeb to ever slide into your DM's?"

The singer yells, "WHO IS HE?!" The crowd encourage her to say it.

Unfortunately for us, she chews down on some bull penis.

Well, that was entertaining!

LOOK: Harry Styles Gets His Own Eternals Character Poster