Why Was Sherif Lanre Axed From Love Island?

The reason Sherif Lanre was axed off Love Island has apparently been revealed in a ‘leaked screenshot.’

Love Island star Sherif Lanre was booted out of the villa on Tuesday afternoon but the reason has been kept a secret. However, a screenshot, appearing to be of a private conversation between the 20-year-old and an unknown friend, is now being shared on Twitter.

Read the DMs below; 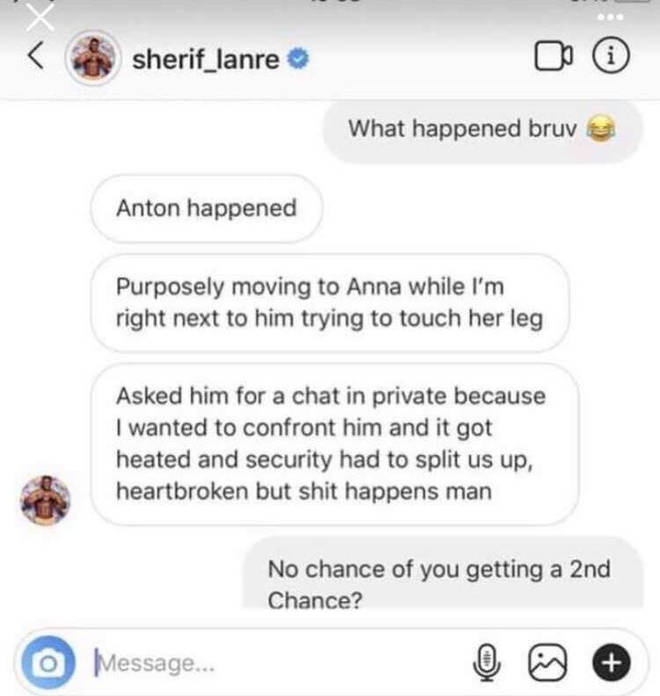 It's hard to truly tell if these screenshots are real or photoshopped as these things are easily faked.

Love Island fans reacted to the DMs on Twitter;

Think it’s fake. @sherif_lanre doesn’t have a blue tick on his account

It looks real but who knows, they should of told us

Show bosses announced the 20-year-old chef had been removed from the villa for ‘breaking the rules’ on Tuesday afternoon.

Sherif said in an official statement;

“In a case of poor judgement, I broke the villa rules and as a result agreed with the producers that it was best for me to leave the villa. I regret that I didn’t conduct myself in the right way and, as a 20 year old guy, it’s something I know I will take on board and learn from. I really enjoyed my time in the villa and look forward to catching up with everyone on the outside.”

Sherif is a semi-pro rugby player who lives in London. He described himself as "upbeat and cheeky and outrageous" and prides himself on his ability to make people laugh.

The Rules Of The Love Island Villa

ITV Addressed Sherif's leave in Iain Stirling's voice over.
Advertisement
Fans of the show were disappointed as they wanted more of an explanation as to why Sherif was booted out of the villa.

Everyone in the UK going to bed still not knowing what Sherif did #loveisland pic.twitter.com/2JmYPK897B

I’d rather find out what happened to Sherif, than watch Curtis pretend to be straight for another 60 minutes #loveisland

#loveisland so we don’t get an explanation for sherif and im just left with this..... pic.twitter.com/5DunzSFtKH

It was announced yesterday that Sherif Lanre had been removed from the Love Island villa for 'breaking the rules.'

Screengrabs of a message from the islander reveal he had a fight with Anton in the villa.

However, ITV claim these messages, 'did not come from Sherif.'

'Anton happened. Purposely moving to Anna while I'm right next to him trying to touch her leg. Asked him for a chat in private because I wanted to confront him and it got heated and security had to split us up, heartbroken but s**t happens man.'

ITV however, has shut down claims of a fight between the Islanders.

A spokesperson for the channel told Heart, 'We have checked and these messages did not come from Sherif.'

This content is brought to you by Eternal Beauty