When you think of basketball players the most popular names that spring to mind are LeBron James and Michael Jordan but there is another player that is putting the sport in the spotlight and that’s Love Island’s Ovie Soko.

Since entering the Love Island villa, 28-year old Ovie has lit up the Spanish location with his bubbly personality and hit it off straight away with pharmacist Anna Vakili when they got together in a shock recoupling, but Ovie’s heart was broken when she decided to get back together with Jordan.

Ovie has now found love with newcomer India Reynolds who is a page 3 model and they have been getting on very well with BoyleSports forced to slash the price on the pair into 10/3 from 16/1 following a series of bets placed on them to become the winning couple.

As a result of this market move, Ovie and India are now the new second favourites behind Tommy and Molly-Mae who have drifted again into 8/13 from 4/11 but were as short as 1/9 just days ago. Curtis and Maura have now moved down the market one spot into third favourites at 6/1.

Michael and Francesca were voted off the show on Sunday night’s episode with Michael predicting Anton and Belle to go far but that hasn’t reflected in the betting with their odds drifting out to 10/1 from 8/1. Greg and Amber have seen a massive move into 9/1, cut from 50/1 with the pair seeming very comfortable around each other. 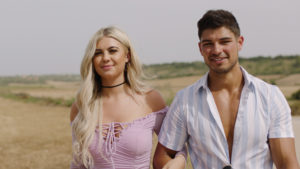 “Ovie might have won viewers over with his funky fashion sense and down to earth vibes, but the sportsman has been unlucky-in-love in the villa so it’s great to see him and India getting on so well with their odds now 10/3, cut from 16/1. Ovie is a likeable character and so is Maura so the outright market is really starting to change up now as the favourites Tommy and Molly-Mae drift again and are now 8/13 from 4/11 but were 1/9 just days ago”.

New To Netflix February 2020: To All The Boys 2, Cable Girls Final Season & More