She said she's, "not rooting for her," and she thinks she's, "playing tactics."

As quoted by MailOnline, Laura asked Shannon, "Who is playing a game?"

"It was very short lived - but Libby is the best, Kaz is energy, I love her so much."

She added, "I think some people are playing to the cameras... like Chloe is playing tactics…"

"But it is a game show! So that is to be expected."

Laura asked Shannon if she was worried Chloe would pick Aaron in the coupling up, and she admitted she wasn't.

She said, "Chloe kept her cards close to her chest, nobody had a clue... but did I think she’d pick him, no."

The former Islander reflected on her shock dumping, "I had no idea, I was sitting there all smug."

Shannon was told to leave the villa when Chloe coupled up with her partner Aaron, leaving her single.

The former Glam Model said she felt, "almost winded," when she received a text telling her she had been dumped from the Island.

"I thought I was gonna go on a date and then I was told to pack my bags."

On where she stands with Chloe, she said, "I wish her all the best but I'm not rooting for her - let's be honest."

Chloe's family were inundated with death threats and vile messages after Shannon was dumped from the villa.

They took to Instagram to address the backlash, reminding people it's just a show.

'people are flooding her inbox threatening to kill her themselves.' 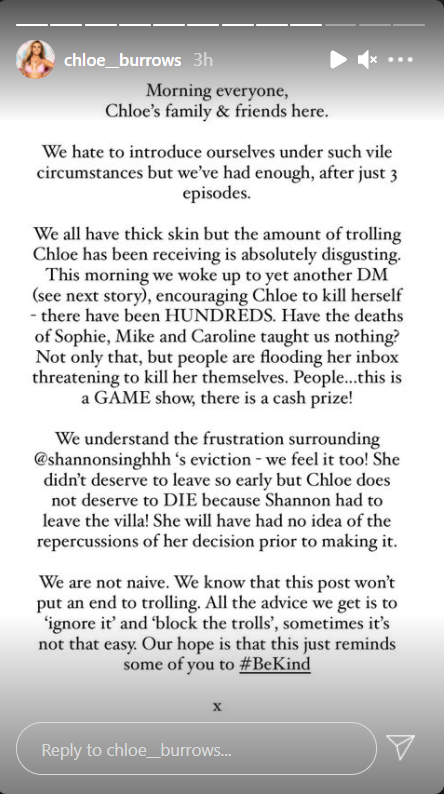 It wasn't long after this that Love Island released a statement saying they won't tolerate this type of behaviour.

They said, 'We want Love Island to be a positive experience for all our cast members and their friends and their family members.'

The show urged viewers to think before they post.

Chloe Burrows Says Millie And Liam Were 'Like Mum And Dad'