We can't cope with Tommy Fury's adorable tribute to girlfriend Molly-Mae Hague at his US boxing debut.

If you watched Love Island in 2019, then you'll know exactly what that little elephant symbol on his belt represents.

During their time on the dating show, Molly-Mae's elephant teddy Ellie Belly became a massive focal point in their relationship.

When she returned home from Casa Amor, he stood there, single, waiting for her, with Ellie Belly in his arms.

The teddy played a big role in him asking her to be his girlfriend too.

On Sunday night, Tommy went up against Anthony Taylor in Cleveland, and he defeated him.

Ahead of the fight, the former Islander stepped out in a blue satin robe.

Fans were quick to spot the elephant symbol embedded onto the belt, which we're assuming is symbolic of his love for Molly-Mae.

Fans of the couple flocked to the comments section to gush over this adorable tribute.

One Instagram user wrote, 'It’s Ellie bellie on the robe for me '

Another said, 'Molly mae and tommy ’s relationship is a goal in life to get to'

Molly-Mae later took to Instagram Stories to confirm the elephant symbol was in fact a tribute to Ellie Belly.

She re-shared his post, and wrote, 'Anyone spot tommys lucky charm on his robe?'

Check out her story below: 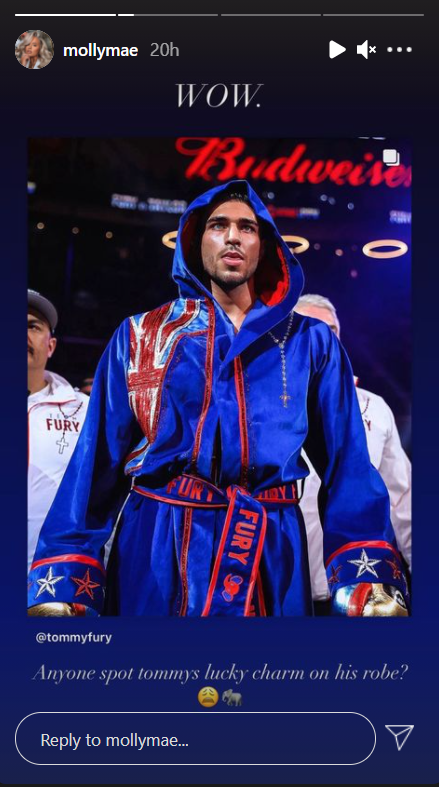 We honestly can't get enough of these two!