Elizabeth Banks Working On A Flinstones Sequel Series For Fox

A Flinstones sequel series called Bedrock is in the works at Fox.

Elizabeth Banks is not only executive producing the project, but she'll also voice a grown up version of Pebbles.

Banks is producing as part of her overall deal with Warner Bros. Animation via her Brownstone Productions.

The show follows the family two decades after the original series.

Fred is on the brink of retirement, while Pebbles is in her twenties, pursuing her dreams. 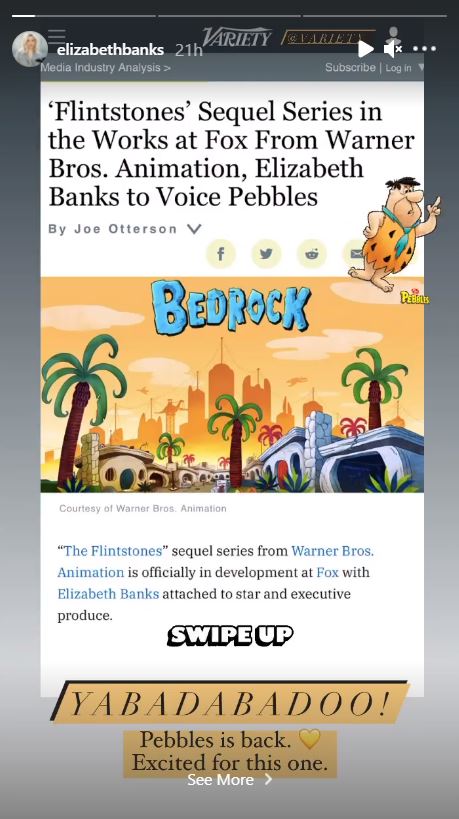 As quoted by Deadline, 'As the Stone Age gives way to a shiny and enlightened new Bronze Age, the residents of Bedrock will find this evolution harder than a swing from Bamm-Bamm’s club.'

The pilot script is being written by Lindsay Kerns.

Michael Thorn, the President of Entertainment for FOX Entertainment, released the following statement to Deadline:

'Long before the Simpsons and Springfield, the Griffins and Quahog or even when the Belchers started serving burgers on Ocean Avenue, there were the Flintstones and Bedrock.'

He continued, 'Their imprint on the animation universe is undeniable and the idea of adapting it for today’s audience is a challenge we here at Fox are very much looking forward to taking on with Warner Bros., Elizabeth and Lindsay.'

'No pressure whatsoever, really,' he concluded.

Speaking of old classics making a return, the first look at Addison Rae's She's All That remake has been released.