Picture This Announce Support Acts For Malahide Castle This Summer

Picture This have announced the support acts for their Malahide Castle gig on June 27th.

Moncrieff, Ella Eyre and New Rules will join them on stage and we are so excited. 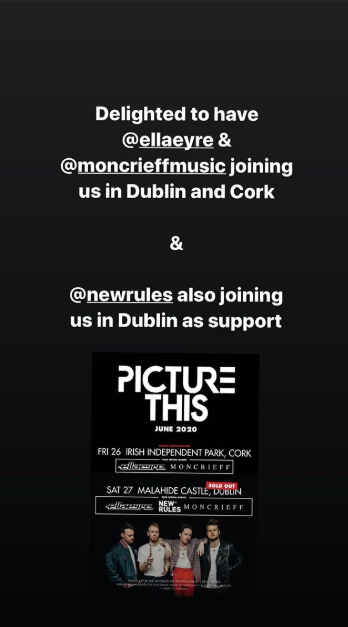 New Rules are a three piece from the UK and Ireland.

Not even a year old and they've already supported Julia Michaels and Little Mix on their UK tour dates.

Moncrieff is an Irish artist best known for his single Like I Do which has been doing incredibly well.

The track is part of his EP The Early Hurts and accompanies three other songs.

Ella Eyre is an artist from the UK who's best known for singing Banx & Ranx's hit Answerphone.

She's collaborated on massive hits with the likes of Sigala, DJ Fresh and Jax Jones.

The Picture This boys announced the gig news in October last year.

It follows the release of their hit single One Night.

Picture This are fresh off supporting the Jonas Brothers on their Happiness Begins UK & Europe tour.

They thank the boys on social media for, 'being the nicest dudes ever.'

'Also hello to all our new followers, see you on the road again soon.'

Massive thank you to the @jonasbrothers for the most amazing tour of the UK and Europe and for being the nicest dudes ever. Also hello to all our new followers, see you on the road again soon 👋🏻

Tickets for their Dublin date are sold out however, there are still some available for their Cork date here.

Picture This Announced For Malahide Castle Next Summer