Taylor Swift has released a snippet from the re-recorded version of her 2008 hit Love Story.

It's being used in a new ad, written by Ryan Reynolds, for the dating site Match.

Taylor's re-recording her earlier works in a bid to own them again.

It's after Scooter Braun bought the rights to her back catalogue by purchasing her former record label.

He then sold them to a private equity company called Shamrock Holdings.

Been getting a lot of questions about the recent sale of my old masters. I hope this clears things up. pic.twitter.com/sscKXp2ibD

The singer's been teasing her fans, revealing she's already started re-recording the work.

And now she's released a snippet from the new version of Love Story.

It's being used in an ad, written by Ryan Reynolds, for the dating site Match.

The advertisement is set 11 months ago and begins with the devil sitting on his throne in hell.

He looks extremely bored, until he notices he just got a match on the dating site.

The devil meets up with the girl he matched with in a park on earth. 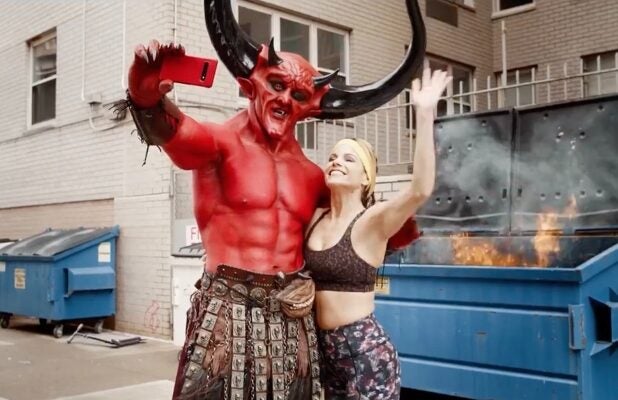 They spend all their time together breaking the rules and destroying the world.

Ryan Reynolds captioned the clip, 'A match made in hell is still a @match.'

Okay so while my new re-records are NOT done, my friend @VancityReynolds asked me if he could use a snippet of one for a LOLsome commercial he wrote so...here’s a sneak peak of Love Story! Working hard to get the music to you soon!! https://t.co/0vBFXxaRXR

We can't wait to hear the full song!