Scott Disick gets in on the fun

It seems Scott Disick has been loving the reaction to his recent encounter with Megan Barton Hanson.

He reposted a hilarious video from a TikTok user laughing about the entire situation.

A post shared by M E G A N 🦋 (@meganbartonhanson_)

In case you missed it, Scott sent Megan a DM over the weekend.

He asked that she apologise for how she treated Eyal Booker on Love Island in 2018.

The reality star wrote how disgusted he was, 'to find [her] mugging him off, and taking full advantage of his unbelievably beautiful sense of humor, and vulnerability.'

Shocked by his words, Megan shared a screenshot of their messages on Instagram Stories.

She captioned it, 'Its not often I'm left speechless but... sorry!?'

'What have I just read? Genuinely a little concerned about Scott tho.'

Ever since, hilarious memes and videos about the encounter have been doing the rounds online.

And it looks like Scott's joining in on the fun.

He took to Instagram Stories to repost a video from TikTok user Sarel Madzebra.

In the clip, the social media user comments on the whole situation and struggles to contain their laughter.

"Y'all, I'm in tears. I just went onto Twitter, I've just seen that Scott Disick had messaged Megan from Love Island." 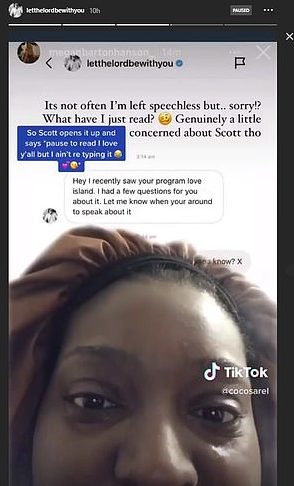 "When I tell you, I am howling. This is the type of content I'm on social media for... because, look at how funny this is."

"Scott Disick is literally the gift that keeps on giving!"

So how do Scott and Eyal know each other?

And Delilah is in a long term relationship with Eyal.

Joe Biden Swon In As 46th President Of The United States