Olivia Attwood spoke about online trolling and the media during an Instagram Stories Q&A last night.

And she shared how the late Caroline Flack helped her cope with negativity after Love Island.

It turns out the TV presenter was consistently there for her.

Olivia was asked if she thinks the state of online trolling and cancel culture has changed since Caroline's death.

The former Love Islander admitted she thinks it's even, "worse than it was."

"I think cancel culture is at an all time high," she said.

"I think people online giving their unsolicited advice and opinions is at an all time high."

Olivia went on to share a message she received from an online troll earlier that day.

The social media user said, "Why do you think you can drive all the way across the country you stupid c**t."

They messaged the wrong person

Olivia hasn't left her home, and has been adhering to guidelines, so understandably, she was a little taken aback by this message.

She was even more shocked to find out they had messaged the wrong person.

The reality star can't understand why someone would think it's okay to send such a nasty message to anyone.

Olivia went on to talk about how, 'hated,' she was after Love Island.

"I was massively unpopular for quite a while and I received... Oh my God... So much sh*t online."

"There was media storm after media storm. You know... Me and Chris arguing, me being pictured with Brad..."

Caroline was always there for her

Olivia revealed, "The onslaught of abuse I'd receive off the back of those stories," was horrendous.

"I learned so much from her and then ultimately, that was one of the factors that cost her her life."

Olivia wrote, 'It's unbelievably fu**ed up. No one human should ever have to endure what she did.' 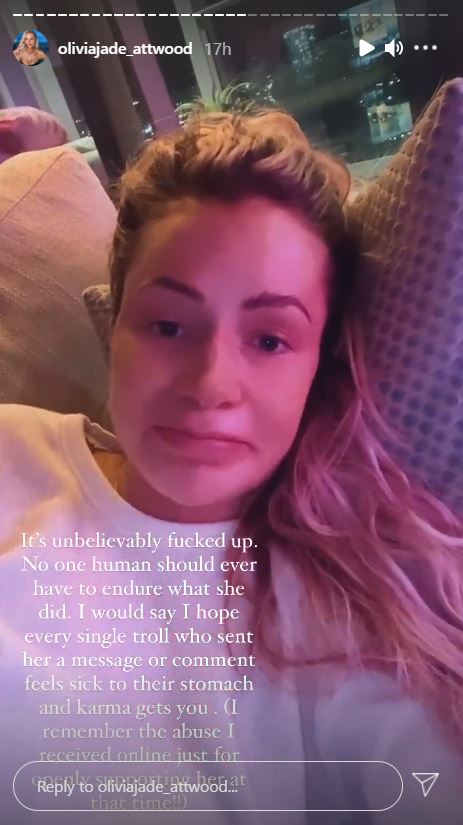 Laura Whitmore, Iain Stirling, Rita Ora and loads more have been paying tribute to her online.

Tributes Pour In On 1 Year Anniversary Of Caroline Flack's Death