Demi Lovato has released a brand new breakup song called, Still Have Me.

It comes days after her split from Max Ehrich.

Demi reportedly blindsided her team when she shared the entire song on Twitter and Instagram last night.

According to TMZ, they were sent into a frenzy trying to get it on platforms for her fans to buy.

Her manager Scooter Braun even commented on her Instagram post, 'Now let’s just get it up on streamers ' 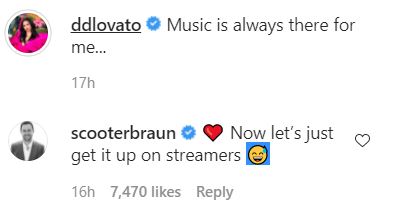 A source told TMZ that Demi wrote the song a while ago.

However, she recently changed the lyrics amid her split from Max.

It was first reported that the pair had ended their engagement last week.

So so so excited for you to see what I’m working on with @talkspace  it’s something that’s extremely close to my heart... I encourage all of you to take care of your mental health as it's so important to be in tune and check in on yourself! Talkspace makes it super easy to connect with a licensed therapist right from your phone  I'm so proud to announce that they are offering $120 off your first month of online therapy when you use code DEMI120 and visit talkspace.com/demi

Shortly after it hit the media, he shared on Instagram that he found out through the tabloids.

He wrote, 'Imagine finding out to the status of your relationship through a tabloid.'

Max didn't stop there; he also shared a series of erratic posts about the breakup.

Demi stayed silent through it all, but it seems she's had enough.

According to TMZ's sources, she became so frustrated that she decided to release the song early.

Her team have since managed to get the single up on streaming services.

“Still Have Me” out now on all platforms https://t.co/Uqhi4P80bP pic.twitter.com/wCLpJk8lNF

To read what Max has been saying, go here.

WATCH: Demi Lovato Breaks Down As She Talks About Max Ehrich Split