Kaz Crossley has had enough

Love Island's Kaz Crossley has hit back at her ex boyfriend Josh Denzel on Instagram.

It's after he commented on a post hinting that Kaz had moved on just three weeks after their split.

We are so proud of these two. Thank you to everyone who has supported and voted for Josh and Kaz on their amazing journey! #Jaz #LoveIsland

It all started when Josh left a comment on a post which read, 'Girls that move on before it's been 3 years after a break up.'

He tagged his Love Island pal Jack Fowler and wrote, 'Three years? How about three weeks?!'

So, Kaz decided to take matters into her own hands.

'Ppl move so brave after they've blocked you.' 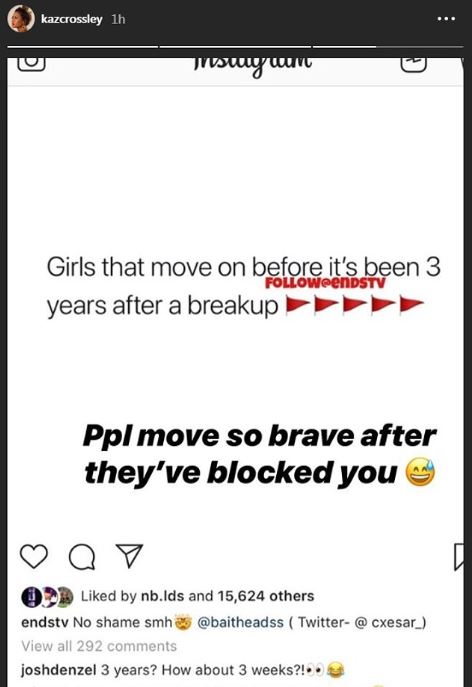 Josh was coupled up with Georgia Steel before Kaz entered the villa.

He made the decision to ditch Georgia and couple up with Kaz.

Uber’s are a bit different round here @kazcrossley

They made it to the final and managed to convince the nation they were end game.

It wasn't until January of this year that the couple called it quits.

'Thank you for everything especially showing me how to love myself again.'

Josh commented on the post with a sad face and a pray hand emoji.

A representative told MailOnline, 'Josh and Kaz have sadly decided to part ways.'

'They have asked for privacy in this difficult time and appreciate all the support they have received.'

Planning the next trip away with this troublemaker comment where you think we should go!

Shortly after her split from Josh, she began to spend time with former Islander Theo Campbell.

The four reality stars had been sharing pictures on Instagram from the trip.

When Kaz shared a cute picture with Theo, Stephen commented, 'what an amazing couple.'

However, Kaz responded, 'stop winding everyone up.'

Campbell also shared a picture of himself posing with both Stephen and Kaz.

Theo however, didn't shut down the comment but simply replied with a series of emoji's.

Officially today nobody stood on the ground was higher than my head in Thailand.. 2565 meters above sea level.. ‍♂ @stevie_bear and @kazcrossley were so happy for me - - #travelling #freesouls #tallestmaninthailand

He's currently enjoying a luxurious trip to the Maldives with his Love Island friends Wes Nelson and Jack Fowler.

Denzel joked that the lads were meeting up for a 'Do Bits Society' reunion.

In one video, Wes can be seen sporting red swimming shorts with a 'DBS' logo tagged on the side of them.

'DBS meetings have been getting very serious. 11 months to catch up on.' 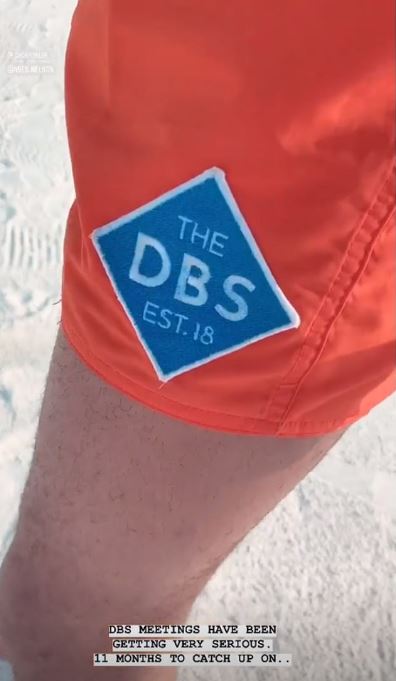 The new series of Love Island is expected back sometime next month.