Jack Fincham reacts to new islander's crush on him

And Jack seems absolutely chuffed by her admission.

Shaughna was one of the 12 contestants announced for the winter series earlier this week.

During her Love Island interview, the 25-year-old is asked who her celebrity crush is.

She responds, 'Jack Fincham is a bit of me on toast!'

He captions the post, 'Well @shaughnaphillips I'm gonna have a look at flights to South Africa now.'

Shaughna will jet off to Cape Town this week for the winter series debut on Sunday night. 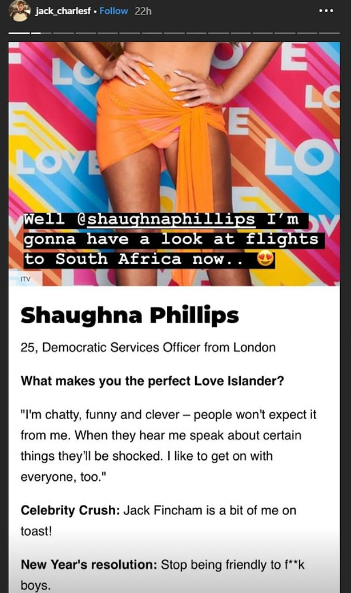 We'd love Jack to make an appearance in the Casa Amor shock twist part of the show.

The reality star won the 2018 series with girlfriend at the time Dani Dyer.

They continued their relationship on the outside but sadly it didn't last long.

The former flames called it quits early last year and she moved on fairly quickly.

Just a couple weeks after the announcement she was spotted kissing her ex Sammy Kimmence.