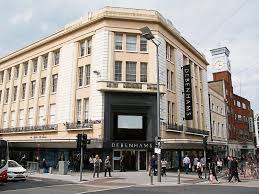 The Mayor of the City and County of Limerick, Cllr Michael Sheahan, has today expressed solidarity and empathy with the employees of Debenhams in the city centre following the announcement that the company is to put its Irish operations into liquidation.

Cllr Sheahan said that while first thoughts are with the employees and their families, he was confident that the level of interest in Limerick as a prime investment location over recent years will, as the economy moves beyond the COVID-19 crisis, extend also to the iconic city centre site.

“This is a particularly difficult day for the employees at Debenhams and their families at what is already a very difficult time.  They were immediately in our thoughts as we received this news today.

“The Debenhams department store has an incredible retail heritage in Limerick, with many people today fondly remembering its time as Roches Stores, which opened here in the 1940s, and was a key retail anchor for Limerick for decades until it was acquired by Debenhams.  The history of the site as a retail store goes back much further than Roches, also, as prior to the 1940s it housed McBirney’s Drapery Emporium. It is, therefore, an iconic retail space in Limerick and an iconic building.

He added: “It is generally a very difficult time for retail and we are very cognisant of that and will be launching early next week a bespoke local authority offering to support retail in the city centre and elsewhere around the county during this difficult time.”

25 People Can Attend Funerals Under Level 5, An Increase From 10

Samaritans Expecting Over 1,000 Calls A Day Because Of Lockdown