Health officials have reported 1,095 new cases of Coronavirus in the Republic of Ireland.

Five more people with the disease have died.

There's a full county by county breakdown image further down this page.

The case numbers represent two records, both North and South of the border.

Officials in the North confirmed 1,217 cases in Northern Ireland earlier.

While four people have died there.

The came after the Executive decided to return to lockdown for four weeks, from Friday.

That's in an effort to stop the spread of the virus.

Cabinet Ministers in the Republic are due to announce additional measures for border counties this evening.

As part of the measures, the hospitality sector will close in Northern Ireland.

However that's except for takeaways and off-licenses , they will have to shut at 8PM each night.

Meanwhile, no more than 25 people are allowed at weddings and funerals.

The Halloween school holiday will be extended until November 2nd there.

Deputy First Minister in the North, Michelle O'Neill says activities outside school were the main reason behind the decision to close them:

"Not necessarily because schools are the spreaders within the schools but perhaps the activity around them."

"So young people congregating after school, or the whole journey to get your child to school."

"All of those things in the round."

"The case in our modelling shows, if we want to be successful in bringing the R rate down, schools were a component part of the restrictions we needed to bring forward."

Today, we again report a new confirmed case figure over 1,000. This situation is extremely concerning.

We each need to reduce contact with other people, so that means staying at home, working from home where possible, physical distancing & stopping discretionary socialising. https://t.co/JIs4OXFw7n

Border Counties To Move To Level 4

Cabinet Ministers will meet this evening to decide whether or not to move border counties to level four restrictions.

A high level officials group was briefed by the Chief Medical Officer this morning.

That was after Northern Ireland announced the four week circuit break lockdown.

It's expected Donegal, Cavan and Monaghan will be moved to higher restrictions while Louth and Leitrim may escape them.

A full announcement is expected tonight as to whether those restrictions will be needed to bring the border counties in line with Northern Ireland.

However Minister for Education Norma Foley says schools will not close:

"It is an absolute determination that we would maintain that our schools would remain open."

"So it's clear that this is not just within the education sector, I think all of society is very keen that we'd maintain our schools open."

"That's what we intend to do." 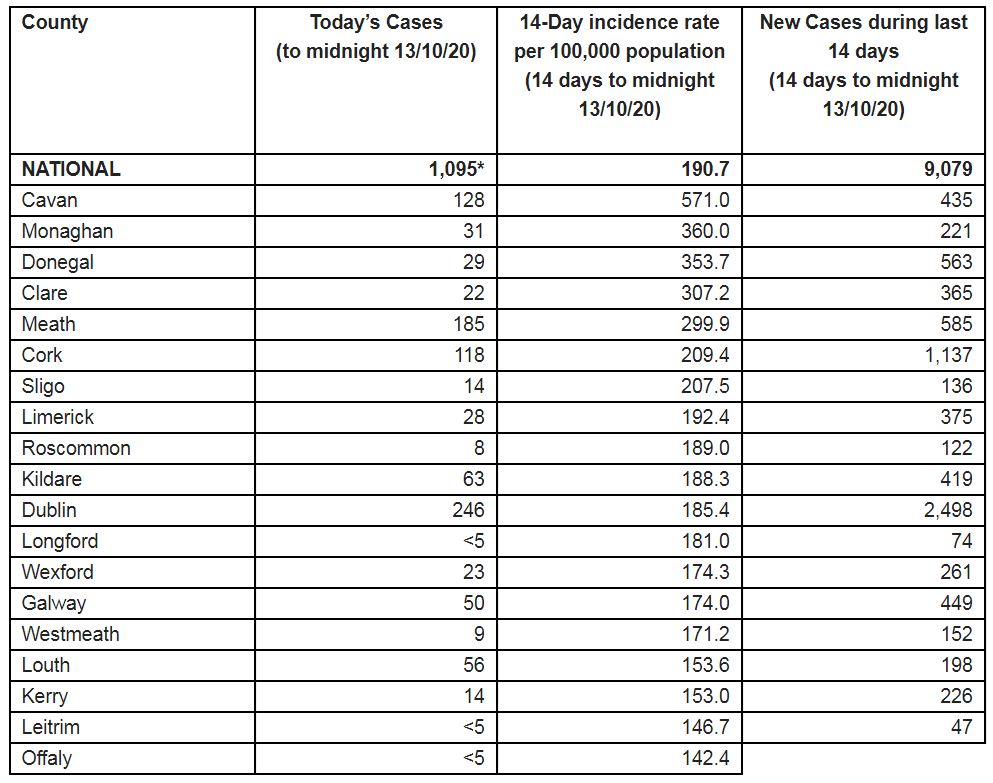 He's urging everyone to follow the public health advice, so this doesn't get worse.

"This situation is extremely concerning."

"Every single one of us has a role to play."

“We each need to reduce contact with other people as much as possible, so that means staying at home, working from home where possible"

25 People Can Attend Funerals Under Level 5, An Increase From 10

Samaritans Expecting Over 1,000 Calls A Day Because Of Lockdown

Pubs & Restaurants "Unlikely" To Open In Time For Christmas